Respect, Find Out What it Means to YOU.

This isn't a post to promote stuff.
Just some an opinion I had that I wanted to express.
I'm a new blogger, so what I say is unsubstantial to you guys anyway.

Keep scrolling if you're that kind of thinker.

Okay so the 5 people reading this:

It's been said before, and I will be happy to be the next one to say it, but why, oh why, do I keep seeing photos of unrezzed bodies?
As IF the photo taker didn't realize her avatar's face looked smeared and distorted? 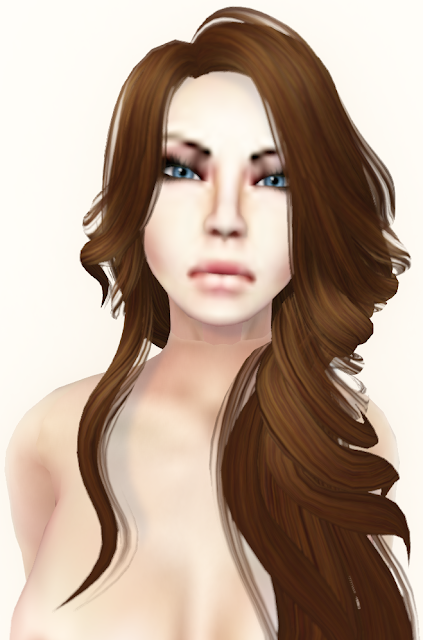 And I understand overlooking something.
I am the QUEEN of Over Looking (and AFK), and as annoying as it is for me, I retake the picture.
I am in no way a good Photoshopper. I didn't open the program until March when I began blogging.
I suck ass compared to the majority of you. So this isn't soapboxedness.

It's respect for a designers work.

They send you a skin they spent months on (if it's not stolen) or a textured clothing item and you wear it, but don't give a shit that it's blurry and snap away.
Then upload it for us and the designer who regrettably sent it to you for us to all shake our heads is disappointment.

ALL of you know this.
But since some of you don't use it, I'll remind you.
It literally takes ONE second to point your mouse to the ADVANCED menu on your viewer.
Then hit Rebake. It's the TOP option.
The TOP!
Even LindenLabs/Phoenix knew the importance of Rebaking.
The TOP! 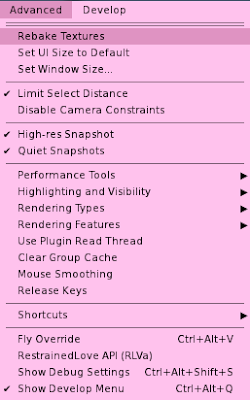 And if you're as lazy as me, a good quick set of hot keys will do the trick.
CTRL + ALT + R

You have like 5 seconds to take your photo after that, so it's a good idea to be in the pose/position you want to be in, and quickly take your shot.

Sadly, I'll see a mushy face tomorrow and feel the same disgust as I always do, but I thought it was necessary to comment on it.

Not intended to make controversy or enemies (I have enough of those, thanks) but to remind some bloggers these designers don't have to send you shit, and you should show some respect for their hard work and efforts.

Author: Princess Usbourne at 2:43 AM

I really cannot believe your language here. I will no longer be following your blog, and mention your horrible post to GlueInk.

@ Annon: No one cares about your rude comment.
Instead of bashing Princess, try using some adult language, maybe like:
Umm excuse me, is there a need to talk the way that you do about this subject? If so, I will not be following this blog any more.

See how easy and ADULT that is?

@ Princess:
OMG! Are you and I the only ones that notice this?
Kids and their Phoenix Firestorm viewers. Not to mention the dumb ass designers making shit with THEIR windlight settings and SEND their settings to customers. Oh good gawd! Like we have the same shape, skin, hair and lighting that these dumb ass designers use to make their shit with.
Get a clue designers!
Get a clue bloogers!

If you want that title, "Blogger" or "Designer" then show us that you deserve it! Show us, meaning your Customers and Readers!

And yeah, you're a very unhappy and vile person. =/ I really don't understand why you spew so much hatred towards everyone. I guess you spend too much time on grid and not in the real world to be aware that kindness is something worth having.

and if you're sponsored by glueink, how does she feel about your promoting hush skins? Being that she contributes to the cause to help Curio?

//And yeah, you're a very unhappy and vile person. =/ I really don't understand why you spew so much hatred towards everyone. I guess you spend too much time on grid and not in the real world to be aware that kindness is something worth having.

and if you're sponsored by glueink, how does she feel about your promoting hush skins? Being that she contributes to the cause to help Curio?//

You idiot.
I haven't posted a blog about HUSH since I the day I found OUT. I'm not taking my posts down because FIRST she hasn't been legally found guilty. There are bloggers STILL blogging and wearing HUSH skins, go fuss with them, I'm not going to try to defend myself to a NO ONE.

And I said SHIT 2 times and ASS once and I'm vile? LMAO. You'd hate me iRL because I'm a sailor. Don't like it, don't read me. Easy peasy. I'd rather you never lay eyes on this blog again. I can't stand the thought of things like your eyes glancing at my words.
Punch yourself in the face.

@ Enid ... I was wondering what those note cards were that I kept getting ... I assumed they were windlight but I had no clue how to put those into my settings. Plus I thought I had like every windlight there was anyway? Is it totally necessary for them to send that?!
LOL.

thank you for editing your original blog post to make it more polite. =)

I didn't.
Thanks anyway.